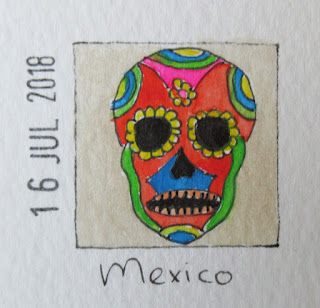 A common symbol of the holiday is the skull (in Spanish calavera),
which celebrants represent in masks,
and foods such as sugar or chocolate skulls,
which are inscribed with the name of the recipient on the forehead.
Sugar skulls can be given as gifts to both the living and the dead.
Posted by Margriet at 1:00 AM