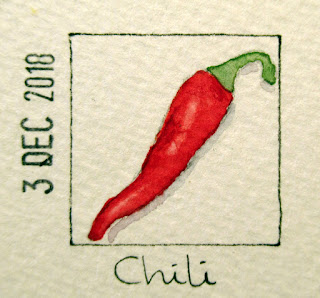 I don't know much about Chile,
but the first thing I thought about was a chili pepper!
Chili peppers have been a part of the human diet
in the Americas since at least 7500 BCE.
The most recent research shows that chili peppers were domesticated
more than 6,000 years ago in Mexico,
and were one of the first self-pollinating crops cultivated in Mexico,
Central America, and parts of South America.
The name of the plant is almost certainly unrelated to that of Chile, the country,
which has an uncertain etymology perhaps relating to local place names.